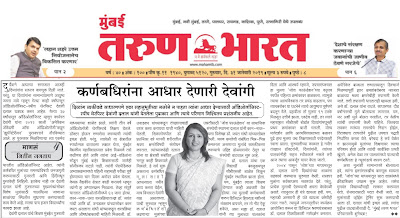 Posted by Bollywood2business at 04:51 No comments: 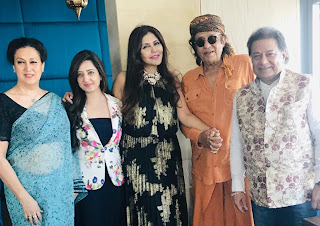 JamVwal, looking gorgeous in a gold lamé slinky creation, shared “I believe India is not its 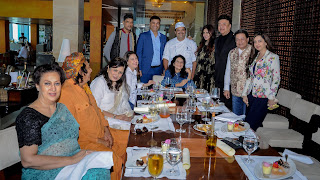 cities but its villages and there must be rural development and women empowerment in tier two and tier three cities for the country to forge ahead. Technology, smart learning, skill development and e-education using technology and technical advancement is the key.”

Said Bhatia of Detel India “We believe that our feature phone is a means to connecting #40croreindians and the foundation works and my missions is to equip the underprivileged kids and farmers in villages by giving feature phones and televisions to grow their exposure and knowledge base.”

Posted by Bollywood2business at 03:11 No comments:

This Valentine’s season, Red Ribbon Musik is back with three romantic music videos - Ye Dil Deewana Mane Na, Yeh Mujhe Kya Hua and Toota Hoon Bikhra Nahi. The first song is by Anuradha Paudwal called Ye Dil Deewana Mane Na, a haunting melody, the composition and lyrics are by Laxmi Narayan. The second, Yeh Mujhe Kya Hua, a treat for music lovers, is sung by the versatile singer-performer Lalitya Munshaw and Aishwarya Nigam, is composed by Puja Neelam Kapoor and its lyrics are penned by Kashi Kashyap. The picturesque music video for this song, filmed in the scenic Himalayan hilltops of Rishikesh and Mussoorie , Uttarakhand, features Lalitya Munshaw and Kapil Gujjar of Rubaru Mr. India 2017 fame. Lalitya Munshaw is also the woman behind Red Ribbon Muzik. The third song by Aryan Pandit is ‘Toota Hoon Bikhra Nahi’, a sad romantic number written, composed and rendered by the actor himself.

Yours to check out all three spectacular songs on YouTube and listen to them on all the digital platforms and musically celebrate this Valentine's Day!
Posted by Bollywood2business at 02:27 No comments:

Woh Jo Tha Ek Massiah Maulana Azad, the film based on the life of the freedom fighter-scholar-activist Maulana Abul Kalam Azad, was released last week. The Times of India’s review of the film stated, “If you are intrigued to learn more about Indian history in general and Maulana Azad in particular, then you can turn to ‘Woh Jo Tha Ek Messiah Maulana Azad’.” The film achieved critical acclaim.

The music release on digital platforms was through singer-performer-entrepreneur Lalitya Munshaw’s Red Ribbon Entertainment, a leading music company and record label. The film’s music boasts five inspiring tracks. ‘Abul Kalam Azad tha Bharat ka dulara’ and ‘Tu hai mashgul bahut’, two tracks of the album are sung by Vivek Naik. ‘Hum sab mile toh desh ko anjaam milega’ is sung by Sachin Jarle and Sujata Patwa. ‘Apni apni aag mila lo sholay ban jayenge’ and ‘Ae khuda ye kya kiya’ are sung by Pancham Pardeshi. The lyrics have been penned by Dr. Rajendra Gupta and chorus music has been craftily incorporated into these tracks by Darshan Kahar, the film’s music composer. On the music’s digital release, Lalitya Munshaw averred, “We feel proud to be associated with the makers of Maulana Azad biopic, the film on the man who contributed so much to our India. This is the age of biopics of personalities like Maulana Azad, Balasaheb Thackeray among others. The music is energizing and lyrics penned are beautiful.”

Written, directed and produced by Dr. Rajendra Gupta Sanjay, this biopic on India’s first education minister is a fitting tribute to his legacy.
Posted by Bollywood2business at 03:39 No comments:

Dr Prem Jagyasi’s Carve Your Life’ Is A Bible To Life: Bhagyashree 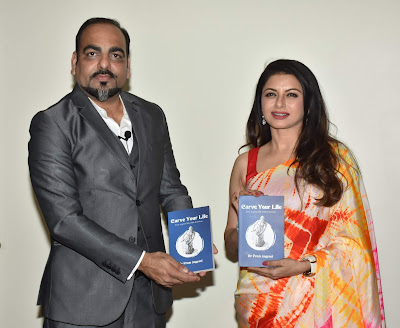 Posted by Bollywood2business at 01:34 No comments: