The Differently Abled And Bravehearts Are Heroes 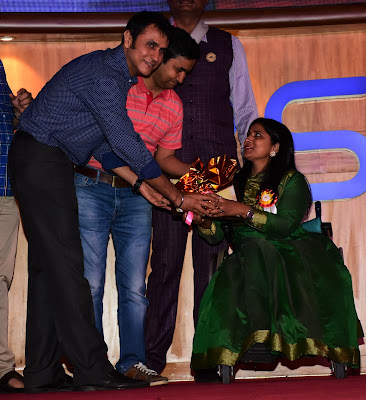 Producer-Philanthropist Dr. Aneel Kashi Murarka, through Ample Missiion, recently organized the Bharat Prerna Awards and the Shoorveer Awards. The event held at the Bombay Stock Exchange, to felicitate ordinary people who have achieved extraordinary acts of bravery, was attended by a bevy of celebrities from the corporate world, film and the television industry, and the social field. Besides hosts Dr. Aneel Kashi Murarka and Siddhant Murarka, mention may be made of Mukesh Rishi, Pooja Bedi, Raju Srivastava and wife Shikha, Abha Singh, Shibani Kashyap, Devangi Dalal, Manju Lodha, Raghav Rishi, Prachi Tehlan, Jinal Pandya, Jiten Lalwani, Shubh Malhotra, Ashok Dhamankar, Bobby Khanna among many other celebrities who walked in hordes on a Sunday morning to encourage and cheer for the awardees.

Patron Kashi Murarka encouraged and appreciated the achievements of the differently-abled with his wise words, inviting each of those present, to take a step forward, and “be the difference,” something that son Dr. Aneel Murarka strives to take to the next level each year with the Bharat Prerna Awards. “This is the first time we have curated the Bharat Prerna awards and Shoorveer awards together so as to make it even better! With dignitaries and celebrities supporting us, on behalf of Ample Missiion, we are grateful,” averred Dr. Aneel Kashi Murarka. On the other facet, the Shoorveer Awards is a unique initiative that honours common men and women who have achieved uncommon goals, from across the country. It honours brave-hearted individuals who have known no fear and have persuaded extraordinary acts of bravery, often at the expense of their own lives!

Kudos to such initiatives!